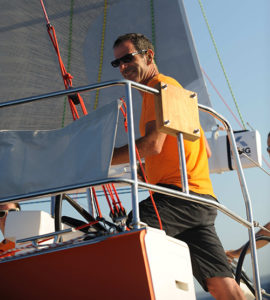 Pierpaolo Ballerini was born in Ferrara in 1962.
He started playing with the sea since he was a baby, in Ibiza.
Before as deckhand of cruising boat during the university (engineering), then as Skipper.
In 1992 he have founded the “Azuree” boatyard, sold in 2011.
He is an expert about technology, which has worked as consultant in different shipyards, tuning the resin infusion technique in 2003.
He had got different cruising boat, with which he participated in many long races as “Romax2” in 1994, or the “Giraglia” single-handed in 2015.
In 2014 he won the Rolex Middle Sea Race double-handed.
In 2015 he obtain the world record in the Discovery Route with Extreme Sailing Academy
In 2015 he won the Giraglia Rolex Cup single-handed.